The Day the Water Bottle Attacked

I grabbed a bottle of water from the shelf in the fridge, tossed it into my bag, and headed out the door to work. I gave no special thought to the water bottle, until I arrived at the office and decided to take a drink.
As soon as I pulled the bottle from the bag I knew something was amiss.

Water is not hard. This bottle was.

The entire bottle was nearly frozen solid. It must have been cold in the fridge! I shrugged it off, deciding that it would melt soon enough, and decided to open it anyway for a sip. I twisted the cap, as per the usual bottle opening methods, and was promptly rewarded with a shower of ice cold water across my lap. The floor got a bit wet too, but I must confess I was more concerned with the cold spray that had gotten on ME.

I will not even begin to divulge the sounds I may or may not have emitted at this event.

At any rate, I swiftly recovered, and decided to stick the bottle into the door of the office fridge, thinking it would likely be able to melt well enough there.

I snagged it after lunch, and it was STILL frozen. Very frozen, in fact. So much that I decided to take pictures. 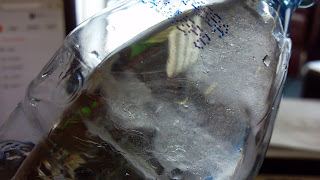 It had melted a little, but was still mostly ice. 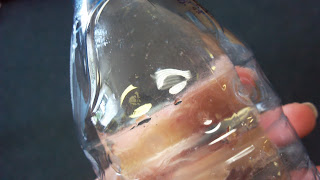 You had to be careful drinking from it, especially early on, because the top part near the neck of the bottle was rather pointed.
Try explaining THAT one to someone. ("What happened to my lip? Oh, well I was drinking water...") 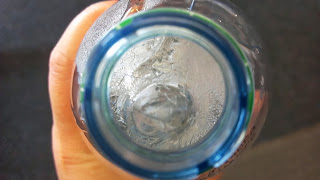 Wild, eh? I finally set it in the windowsill so the sun would help speed along the melting process. It still took it til about 6pm to melt entirely.

Anyway, the moral of this story kids is this: watch out for those water bottles. They'll attack when you least expect it!