This scarf began as one of those 'I want to make something for meeeeee' projects. I'd been buried under requests for things for others (which is nice, don't get me wrong), that it had been awhile since I was able to whip up something for myself. So one night I decided I'd stop at the store and buy myself some yarn to make myself a new scarf. Allllll for me.
I chose the colors originally thinking it would be a Thor-inspired color scheme, but once I started working I realized it was more Captain America-ish than anything. Which works just as well for me.

And so, I'm dubbing this my 'Winter Solider' scarf, in honor of the new Captain America move coming out in April!
(And no, I'm not being paid to plug this movie by Marvel, I just love them is all!) 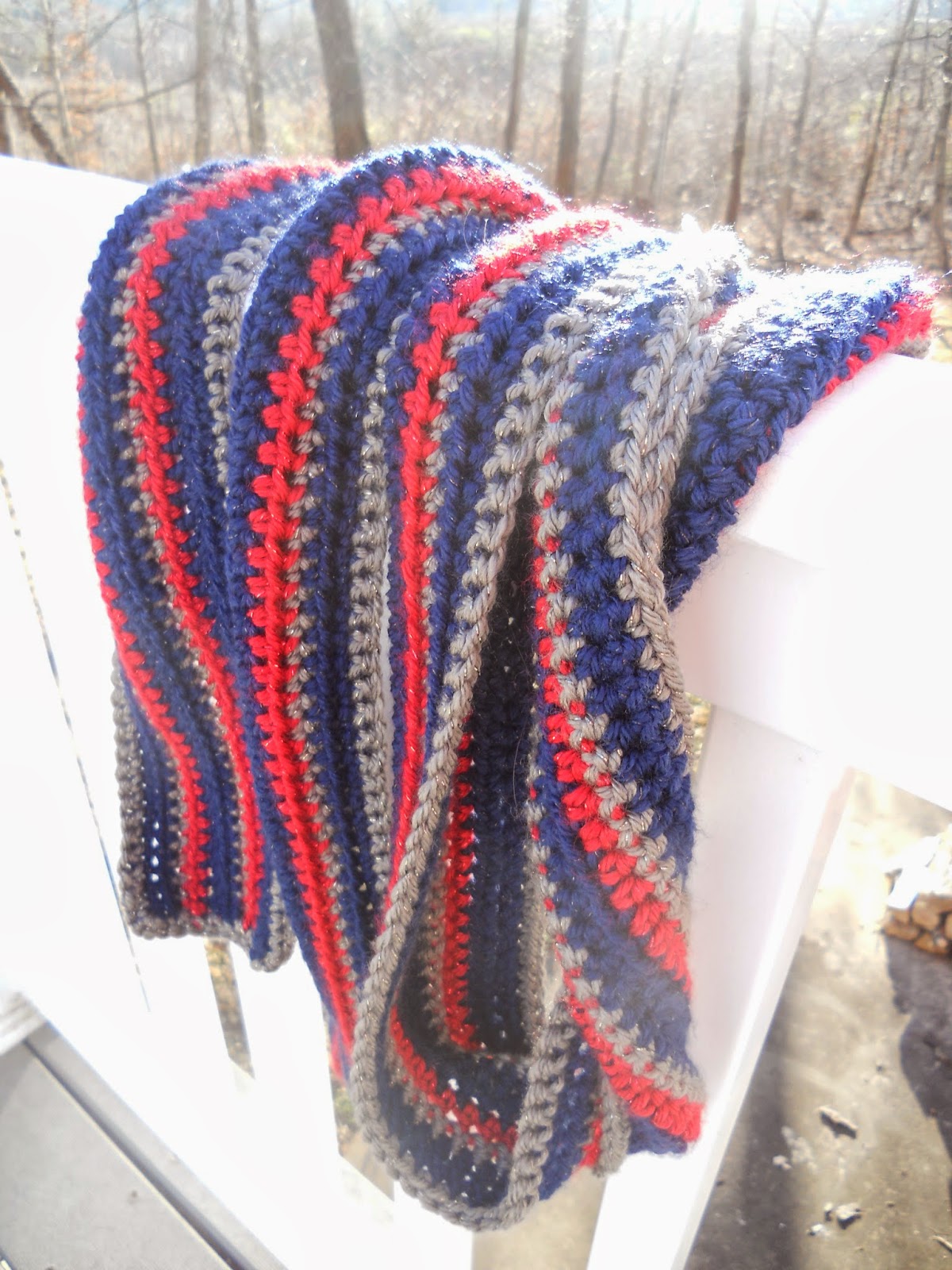 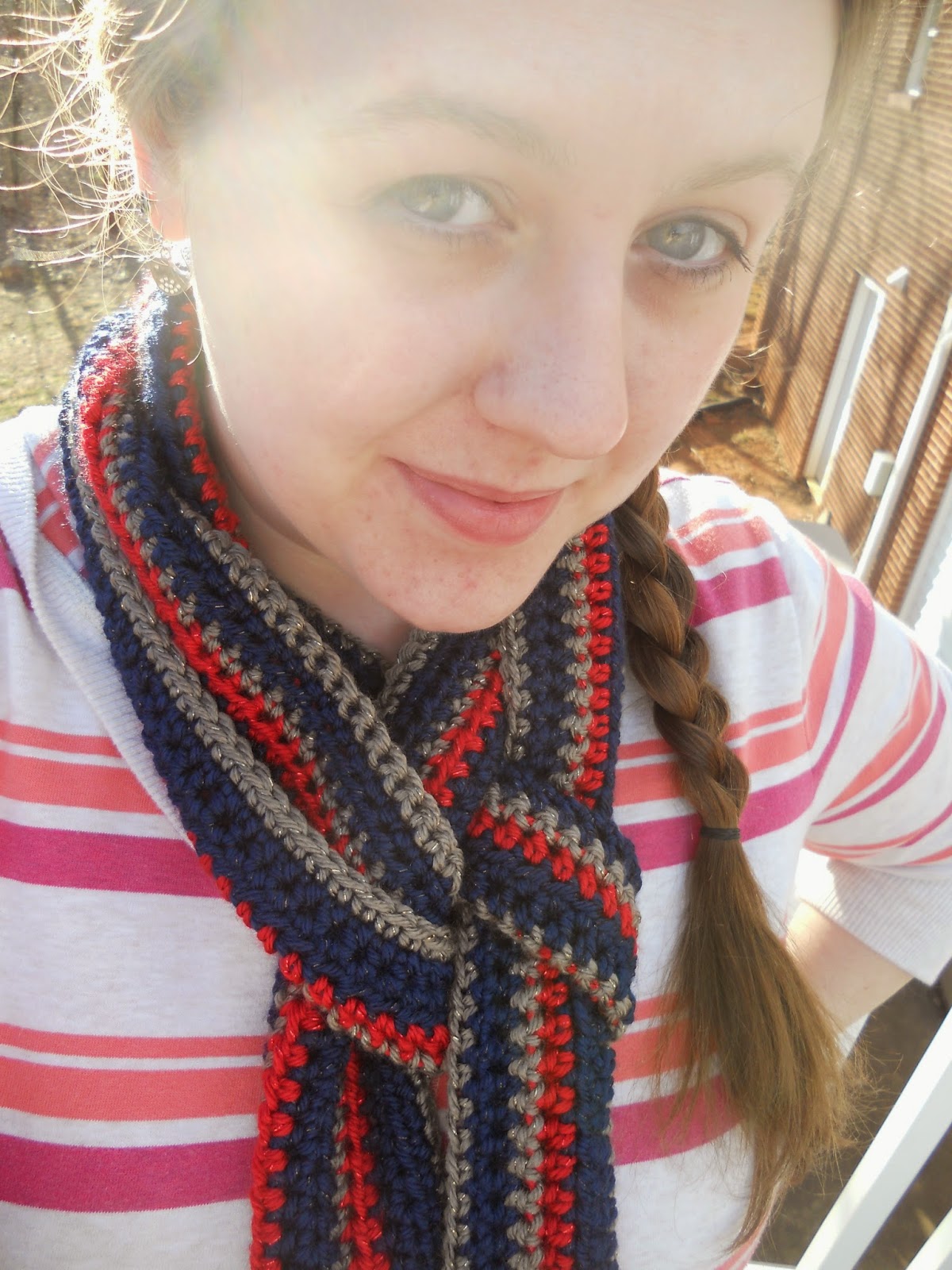 I used three colors of Caron Simply Soft Party yarn, which I'd never used before but ended up really liking. It has all the softness of regular Simply Soft, but with a thread of sparkle throughout! And sparkle is always awesome.
The pattern (or basic guide for the scarf) is below. :) 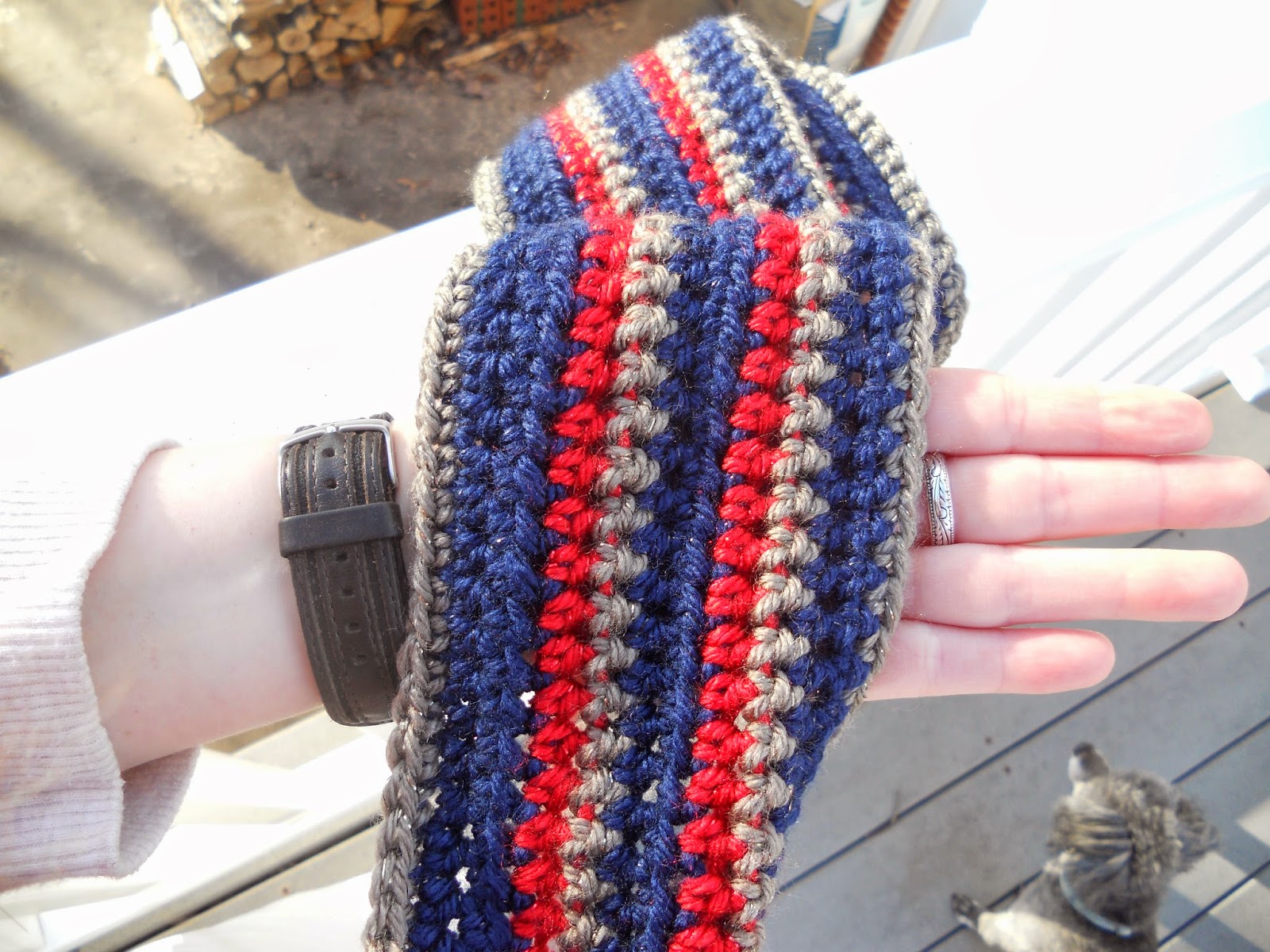 Materials used:
I hook, yarn needle, scissors, Caron Simply Soft Party yarn in navy sparkle, red sparkle and chocolate sparkle (one skein each)
(Note: I ended up running a bit short on the navy with my scarf, but I crochet a bit loosely. This could probably be remedied by using a smaller hook or a shorter beginning chain.) 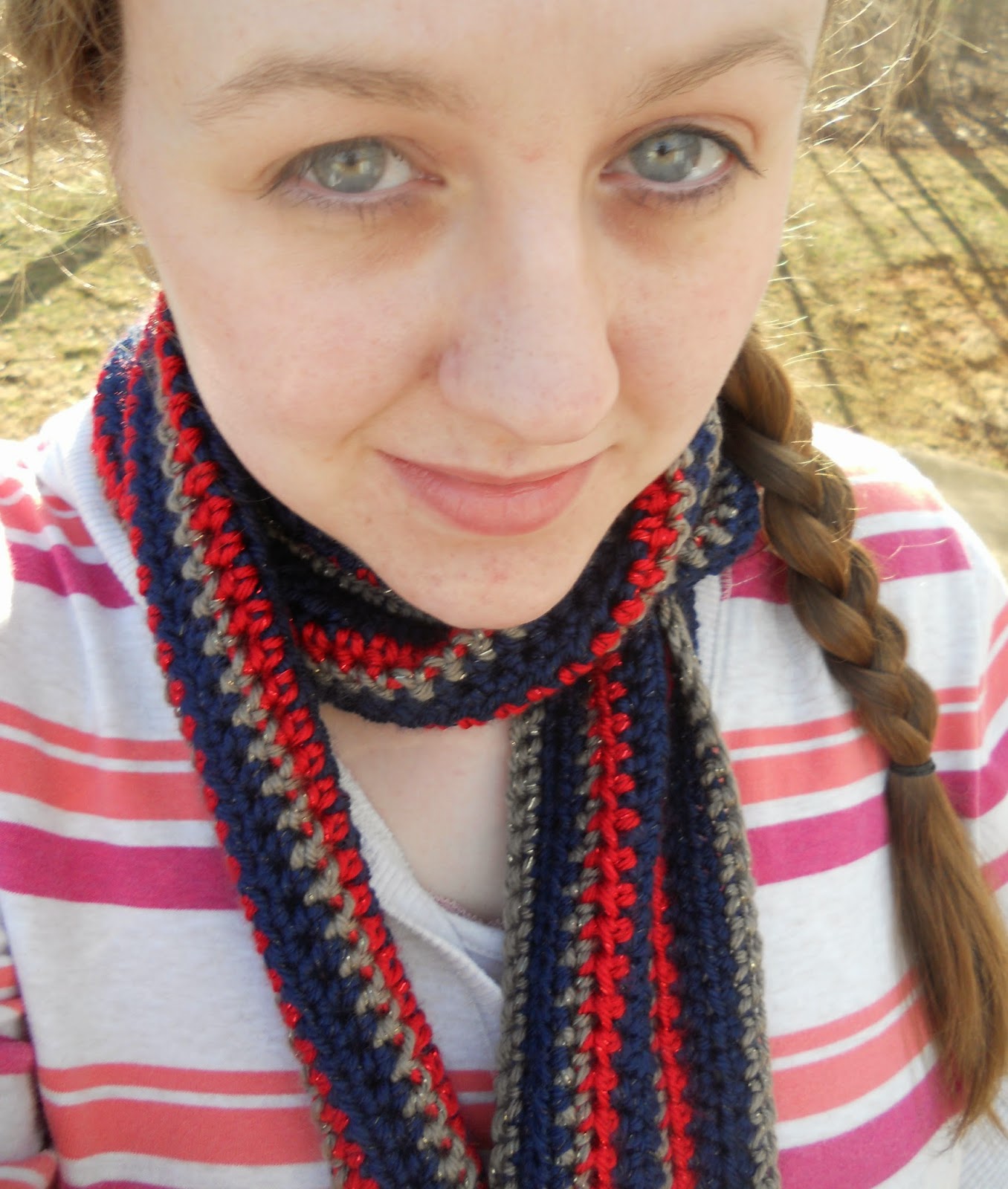 And that's it! It's a very adaptable pattern, so you can easily add more rows for more width, or even leave off a few if you want something skinnier!

And as an added bonus, here's a quick photo of Pepper, who "helped" me take photos of my scarf for this post. 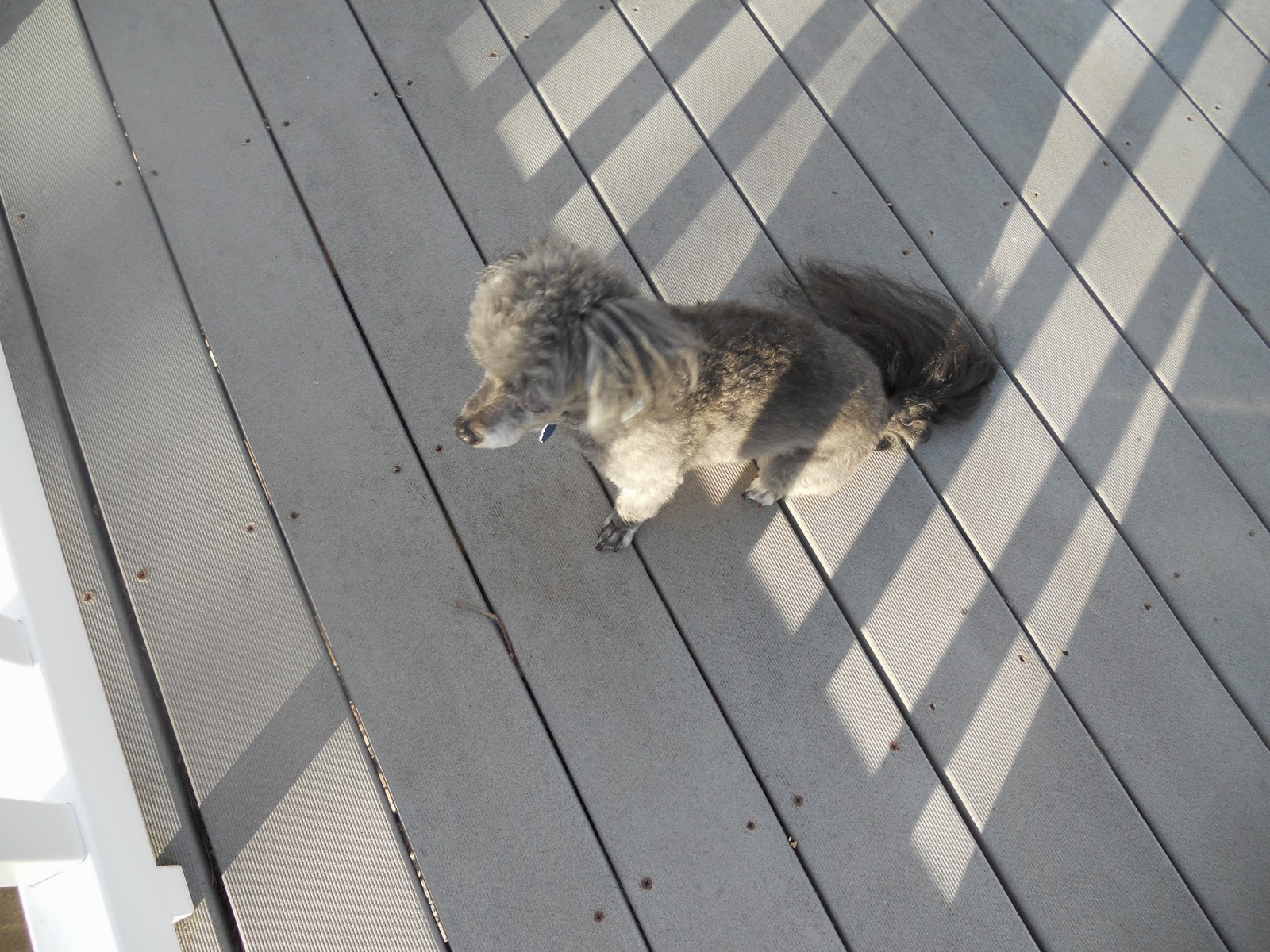