October 28, 2014
I have such great intentions, I really do. I have all these great ideas for blog posts: patterns, tutorials, just random nonsense to share, and I even go as far as to toss ideas/photos/etc into draft posts, to edit before posting.
.....Aaaaand then, as always, stuff happens. Isn't that always the way?

So here's a post that has been buried in my drafts folder since....oh, June or so? :P

This is another 'as seen on Pinterest' post. A super, amazing, marvelously easy pin though. I even debated posting it at all because of it, but then figured, why not!?

I was looking for a cute way to package up money for a couple graduation gifts, and decided this looked adorable.

The light bulbs were easy to find. Hobby Lobby had two versions, one smaller and one larger. I went with the smaller one, found here for $1.99 (which is what I paid in the store). The gold top screws on and off, and it was perfect for what I had in mind.

After some consideration, though, it seemed that it would be entirely too hard to actually get the money inside the container (the neck was SO TINY), and it would be rather difficult to remove as well, if I did manage to get it in there. So I decided to modify the idea a bit, and put candy into the jars instead.
It would still be cute, but perhaps a bit easier for all parties involved.

Enter the smallest, yellow-est candy I was able to find! Lemonheads!
(I know A.C. Moore sells bags of Sixlets that are all one color, and I'm pretty sure you can find M&Ms and other candies this way too, so those are available options if you don't like Lemonheads.) 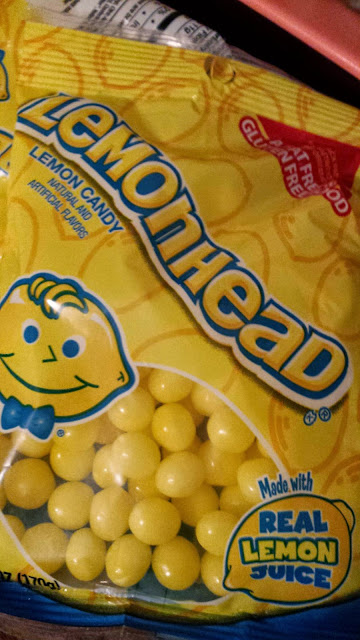 It took about two and a half bags (if memory serves me correctly) to fill both jars. The Lemonheads were perfectly sized to fit into the jars, and I was able to fit quite a fair amount in there!

After that, I used a few small gift tags I had on hand (from the Dollar Spot in Target) to write the message on, and I tied them on with a bit of ribbon. 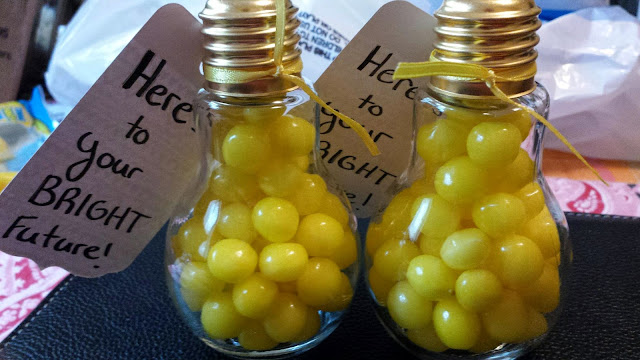 The graduates who received these LOVED them. (They also both pegged them as being from Pinterest, haha!)

Several people who saw them asked how I managed to get everything into the lightbulb, clean out all the wiring, etc. They were surprised to learn that it was a jar from Hobby Lobby! Too bad I had to give away the secret, because a few of them seemed quite impressed up until that point, haha!

So there you have it. A modified as seen on Pinterest idea that will no longer be banished to the drafts folder! Hope you enjoyed! :)