It's been awhile. I realized recently it has been over a year since I posted here, and I figured it was about time to break that silence. So, uh, hi? Did ya miss me?

I have lots of things in the works to post, and I'm excited about them, but for now, I have something simple to share.

Here it is!
(this isn't the best photo, forgive me!) 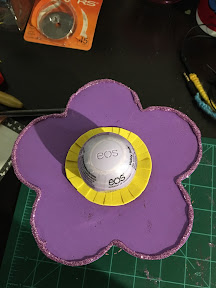 My Mamaw recently celebrated a birthday, and I wanted to make a little something for her. I had seen ideas on Pinterest for cute ways to give lip balm, but they were mostly for the stick kind, and all the EOS ideas I saw just weren't "right". So I came up with this.

I used a flower shaped piece of craft foam, and just cut a circle out of some yellow foam for the center. I added some glitter around the edges for some pizzazz, and used a glue dot to stick the lip balm on there. Super easy and rather cute (if I do say so myself). even if it wasn't really fancy.
And she loved it! Since I wasn't able to deliver it in person, she called me later to tell me how much she liked it. Then she told me what she did with the flower after taking the lip balm off. I had assumed she would just toss it, since it wasn't really that fancy and the lip balm was the actual gift and everything, but I was wrong. She told me that the wreath I made her for Mother's Day (and is hanging on the wall in her bedroom) matched the flower perfectly, and so she hung it in the center of the wreath as a decoration! I think she was as happy with the 'packaging', so to speak, as the gift itself, which I thought was pretty darn amazing. I certainly wasn't expecting her to keep the flower and use it as a wall decoration, but I'm thrilled she found a new use for it. Who knew a little piece of foam was so versatile!
That's pretty much it for this time around, folks. As I said, I have lots of things planned for future posts, so keep checking in! (Or, if you're so inclined, you can subscribe to my blog via email.)

Hope you all have a wonderful weekend!