I love trying international candies. Everything I've tried just seems to taste so much better than what we have available here in the States. I'm not sure if it's that is IS better, or if it's just the factor of "oh hey, this came from England/Spain/Japan/etc". Maybe some of both?

Anyway, last year, while on vacation, I went to a store called IT'SUGAR, which, as you can probably tell by the name, sells candy/sweets. The store also sells some novelty items and such, but I can't say I've ever paid much attention to it, as I was too distracted by the candy! There was a section of the store solely for international candies, and I might have gone a little crazy. But there were jellybabies! And Mars bars! And all these other marvelous candies I'd heard of but never tried! There was also some Japanese candy, such as Hi-Chew, which I bought on a whim and ended up loving.
It wasn't until after that initial visit that I learned there were some cheaper options for purchasing some of the candies, but given that was my first time seeing some of them, I didn't mind too much.

On vacation this year, I went back to IT'SUGAR, and honestly..I was a little disappointed. There weren't as many options to choose from this time, and it seemed the prices had gotten even higher. For example, there was a bag of Hi-Chew that was $5, and I found similar bags at other stores previously for $2 or less! Since I had done some homework on what was available elsewhere, this time I focused on looking for things I hadn't seen before, particularly items from Japan, since I enjoyed the Hi-Chew so much and have seen videos and such of other great items.

And that is how I ended up with a bottle of Ramune Soda. These were $3.49, so it was a little pricey, I think. If the price had been a little lower, I probably would have picked up a couple flavors to try.

There were only three options for flavors in the store; raspberry, melon, and original (I think? the bottle was blue). I chose raspberry.

I stuck the bottle in the fridge when we returned from vacation...and promptly forgot it for a week or so. Oops.

This is what is underneath the wrapping on top. 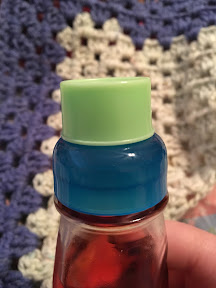 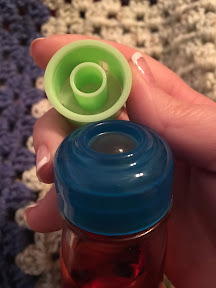 And here is where I became a bit confused. I had never had anything like this, so I was stumped. How in the world were you supposed to open this thing?!
Despite the confusion, I have to admit, I was impressed with how it was sealed. Yeah, I'm a dork. 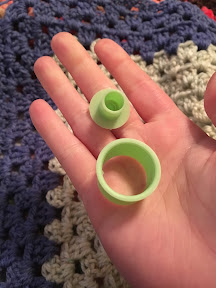 After some brief help from Google, I learned how to open the bottle. The green part of the cap comes apart (as seen above), and you use the middle part to push the marble down into the bottle to "open" it. 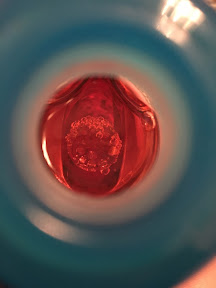 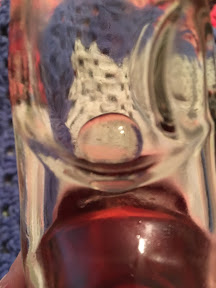 At first it was weird, having the marble rolling around in the bottle while trying to drink. And then I realized something. 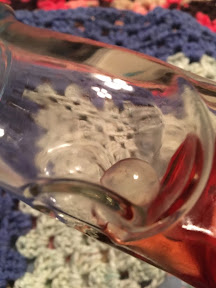 The bottle was shaped so that it would hold the marble in place while you drank. Upon further research, this is called a Codd-neck bottle (named after the inventor), and is expressly designed for this purpose. How cool is that?!

As far as taste: The first sip I took, I was surprised. I had expected it to be very sugary and sweet, like most American sodas. The soda was sweet, but not overpoweringly so. It was actually really nice, compared to what is available here! The raspberry flavor was pleasant too, but not very strong.
All in all, if I were to find this elsewhere for a cheaper price, it is definitely something I would buy again.

How about you? Have you ever tried Ramune soda? If so, what flavor? Also, where is your favorite place to shop for international candies or foods? Leave me a comment and let me know!
Have a lovely day!