The Story of Ser Sandy 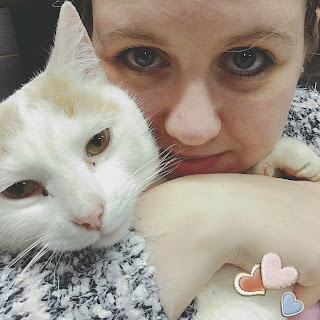 Well, his FULL name (in the style of Game of Thrones) is Ser Sandy Phineas D----, the first of his name, eater of foods and crier at windows.
But generally we just stick with Sandy.

In September of last year, this little furball just randomly showed up at my workplace, looking quite pitiful. He was so skinny you could see his ribs, and you could tell he'd been on his own for awhile. 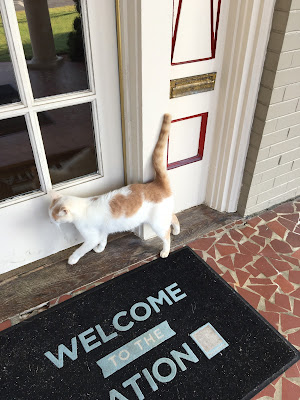 My coworkers and I quickly decided that we couldn't let the little guy go hungry.
So naturally, he began to hang around more. He'd come by a few times a day to visit and grab some food, and then he'd vanish. 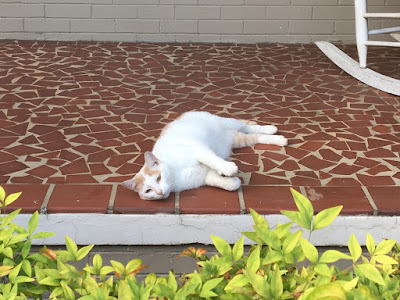 There was initially an on-going debate about whether or not the cat was a male or female, which is how I suggested calling him Sandy, since it would work either way.
And the name stuck!

We started letting him inside the office to roam around, and even started letting him stay in the basement when it started getting colder (the boss was completely on board, by the way!). He started filling out, he was getting attention, and all seemed to be going well. 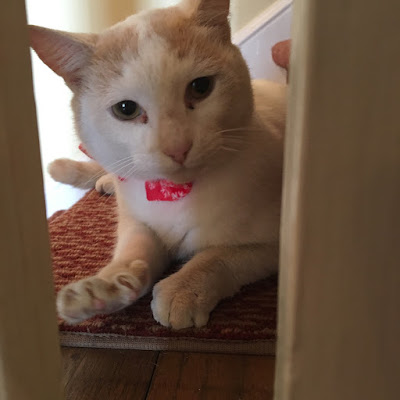 We had hoped to make him a permanent office cat, but Sandy..well, he's loud. Very loud. And when he wanted to go outside, instead of hanging with us, he made it very well known.
Not only that, but the other resident office cat, Sally, absolutely detested him.

So ultimately, the boss decided that Sandy would either need a home, or he would be going to the Humane Society. And I was crushed.

But! As it turns out, my parents took pity, and agreed that I could bring the little furball home.


Sandy was happy enough when I brought him home, and he got along great with Pepper, my dog. I let him stay overnight in the basement, and then because he was so determined to get back outside, I let him out.

And he promptly vanished.

I won't lie, I was devastated. I was terrified something had happened to him, or he'd run away, or something equally as horrifying. I looked for him every day, and left food out, hoping he would find his way back.

And then, one night I went outside to check the bowl of food, and there was a bit less in it. I remarked that something had been there to eat, and I heard it. A faint little meow from the yard. I went running back outside and there was Sandy! He was sitting at the edge of the yard looking quite pitiful, but he came running as soon as he heard me.

I kept him inside for a few days after that, until he got more adjusted in his new home. I still let him outside, of course, but I stayed with him each time and would bring him back in with me. 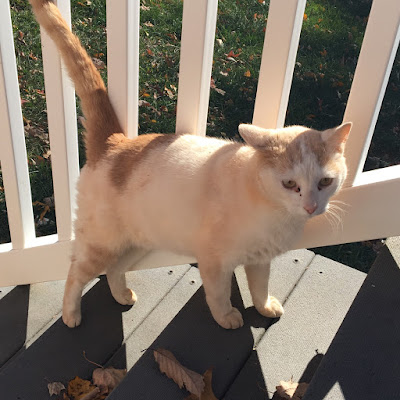 The good news is that he hasn't run away since then. There's been a few nights he's stayed out, but he's never been gone as long as he was that first time.

But there's been an interesting development. Sandy has now decided that he prefers to stay INSIDE rather than out!
And rather than crying to get out...he now cries to get in. >.<
Sandy typically comes inside at night to eat, and to lounge around in the basement, where his bed and all his toys are. That's likely part of the reason he doesn't want to go back outside, because the inside has all the good stuff, haha!
His favorite spot is on my lap. As soon as I sit down he plops himself down and purrs SO loudly. He's the most affectionate cat I've ever had! And I've discovered he is a huge fan of catnip spray.
As you can tell from the photos, Sandy has filled out considerably since September. He's even got a little tummy pooch going on now, but it's adorable.

He knows what time I get home from work, and he's usually waiting for me somewhere around the house when I pull in. Most of the time he'll come to greet me (and to try to sneak inside, too).
So now you've all been "officially" introduced to Ser Sandy, the crazy little stray cat who showed up out of nowhere and somehow became a very special part of my life.

I've already shared a few photos of him here prior to this post, but you can definitely expect more photos and stories of this little furball in the future. 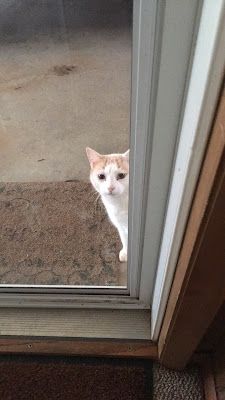 I'll keep you posted on whether or not he ever learns to open doors. ;)