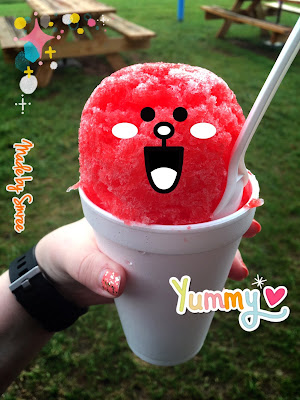 For some time now, the buzz among my family and friends (both online and in real life) has been about Pelican's Snoballs. Everyone who has tried one says they're amazing. And since the weather here in good ol' North Carolina has started to reach peak heat/humidity levels, I was definitely intrigued.

What IS a Pelican Snoball, you ask?

It's shaved ice. According to the website - it is New Orleans style shaved ice. I had no idea such a thing existed! Since there were so many people talking about it, I figured it had to be worth trying out.

So I searched out the closest one, and headed out.

I didn't get a photo of the building itself, but they're pretty easy to spot. They're light blue with pink accents. Trust me, they stand out. 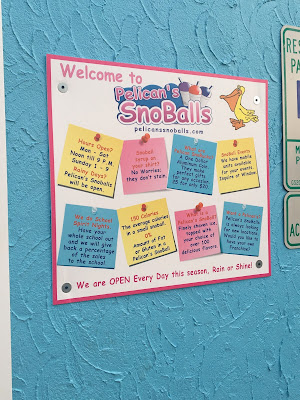 They boast 100 flavors, and the list is pretty extensive. There's even some questionable flavors - like dill pickle and toothpaste (ewwww.)

According to the menu, you can add cream to any flavor to make 'sno cream'. I was tempted to try it, but decided to go with a regular one first. 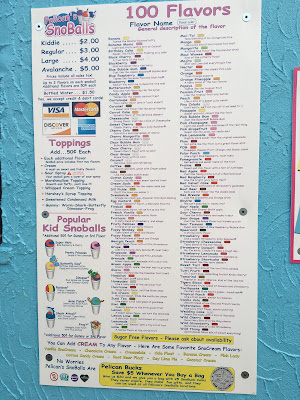 The menu had a color guide as well, showing what color the syrup would be. I'm not sure why, unless it was for allergen reasons?

At this location, you placed your order at the window, paid and then your snoball would be passed through the next window once it was made. All of this after standing in line, of course. We were there around 7:30-8pm, and there were probably 15-20 folks around. 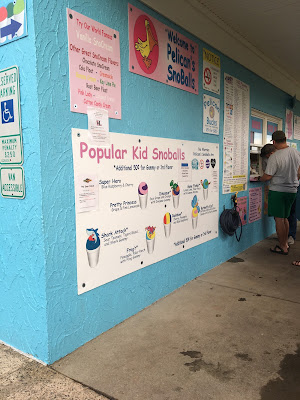 I ordered a regular sized snoball, which was $3, and chose cream soda flavor. My brother chose french vanilla. We like to live on the edge. 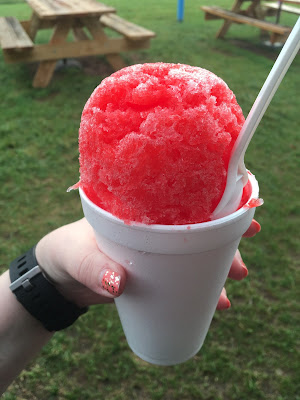 I was definitely impressed with the size! It was actually a little hard to eat at first because some of the ice would shift and nearly fall. Once you made a dent in it, so to speak, it wasn't so bad.

The ice is very, very finely shaved. It's almost a powder consistency. Other types of shaved ice I've had have been 'sharper', and it jabs at your mouth when you eat it. This would almost melt as soon as it hit your tongue.
And it tastes AMAZING.
Seriously, it was fantastic. It tasted just like a cream soda, and the syrup/flavoring was consistent through the entire snoball. That was a plus too, since some types of shaved ice simply fill the cup with ice and dump the flavor on top, so by the time you reach the bottom, its just ice. This was NOT like that at all.

I may or may not have already made a return trip (okay, I totally did), and realized that you can mix up to two flavors with no additional charge. On my second trip, I combined butterscotch and cream soda to make a "butterbeer" flavor.
And I loved it.

I'll definitely be going back, because I saw SO many other flavors that I want to try.
Do you have a Pelican's where you live? If so, what's your favorite flavor? Let me know in the comments!
(Also, this post is not sponsored in any way by Pelican's Snoballs.)