A Testament of Steel - an Advance Review 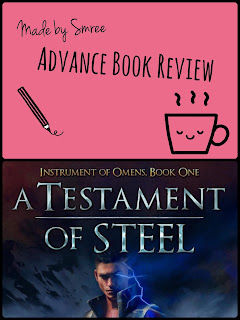 I have read several books by Davis Ashura (as evidenced by prior reviews!), and am beyond pleased to post an advance review for an upcoming release, A Testament of Steel, which is currently available for pre-order.

In the efforts of full disclosure:  I was sent an ARC (advanced reader copy) of this book in exchange for an honest review.  I am also going to attempt to make this review as spoiler free as I can, but it’s going to be tough.  But I’ll do my best.

As I’ve read many of Mr. Ashura’s works so far, I went into this one expecting much of the same.  While Ashura’s books are incredible in terms of world building and developing engaging stories and characters you become truly invested in, my one small complaint is that sometimes his works are a ‘slow burn’.  While he pulls this off well (as I’ve said in previous reviews), it does make it a bit harder in the beginning to keep focus.

This book, however, was NOTHING like that.  From the start, and I mean literally within the first few pages, I was sucked into Cinder’s tale like a vortex.  This book started off with a bang, and I actually stayed up til the wee hours of the morning in my first reading session because I wanted to know where this story was headed.

Cinder Shade (the main character) awakens at the bottom of a well, having no memory of the prior sixteen years of his life.  This coupled with prior events culminate in his undergoing some very serious life changes, such as leaving his village home in Swallow and moving to the town of Swift Sword.  It soon becomes apparent, even from the beginning of this initial journey, that Cinder is not quite the same person that he used to be.  And there is a VERY good reason for this, although it would probably fall into the realm of spoilers if I were to divulge why.

Cinder, in his new found life at Swift Sword, soon finds himself with a new purpose as well - that of becoming a warrior.  He is perpetually working towards his goal of self-improvement, realizing he has innate talents and abilities that he technically should not have, and over the course of the book he winds up gaining entrance into the highly prestigious Elven training academy, the Third Directorate (which gave me some Harry Potter-esque vibes).  There, he is again driven by his goals, desiring to become a warrior of renown, and again surprises everyone with just how swiftly he progresses.  AGAIN, there is a VERY good reason for this, so please, dear reader, do not feel that Ashura has fallen into some trope of poor writing by making his character unstoppable/undefeatable.  Just keep reading, it will all make sense, I promise you.  And if you’ve read any other works by Ashura, you will likely figure out the reasons behind it all quickly.  Just saying.

A Testament of Steel offers more variety, in my opinion, in regard to races than Ashura’s prior works, and honestly, the book gave me some major Lord of the Rings vibes in some ways, since there were elves, dwarves, and numerous other fanciful creatures, such as spiderkin (Shelob, anyone?) and yakshins (think of Ents!).  This added some depth and layers to the tale, as elves don’t think too highly of any race other than themselves (they call themselves the “Blessed Race” - WHAT?).  This ties in with the book’s nod toward a developing love story, which, from the looks of things, is destined to be incredibly complicated.  On a side note - DAVIS ASHURA HOW COULD YOU DO THIS TO ME?! AAAAAAAARGH!

Overall, this has likely been my favorite of Ashura’s works to date.  It was an extremely hard book to put down once I got started, since the characters were so vivid and well-written.  I wanted to know what was going to happen next to Cinder - what mess he was going to put himself into, how the various tournaments would be decided, just how low those accursed Elves would stoop against Cinder...it was truly one of the most engaging tales I’ve read in some time.  While it does offer some benefit to have prior knowledge of Ashura’s works and the world he has created within them (hint hint), I do also feel that one could pick up this book and have no issues whatsoever with having no prior knowledge.

This has been an incredibly wordy review, but I felt it was necessary to try to get my point across as to just how great this book truly is.  A Testament of Steel is a compelling tale, one that is sure to quickly ensnare the reader and take them on a journey like no other...well….almost. ;)

A Testament of Steel is available for pre-order on Amazon HERE, and will be released July 20, 2020.