First of all - Happy Earth Day!

Secondly, as a brief aside, let me say that this post was not sponsored in any way.  I just personally like the products included here and wanted to share them.  That is all!

I do not in any manner profess to be the leading authority on the environmental movement, but I have made the conscious decision to try to be less wasteful, and to make some small changes in order to do what I can for the planet we call home.  Do I still use single-use plastics, and generate more trash that I probably should?  The answer is yes.  But - doing something is better than doing nothing, and my point here is that even small changes can help.

The first change I made was to use less disposable plastic bottles.  I drink a lot of water over the course of the day, and if I used plastic bottles, this would result in a lot of plastic being thrown away.

I’ve been a fan of reusable bottles for a while, just because they keep my water colder over long periods, but my favorite bottles that I’ve found have been the S’well brand.  They’re a bit pricey, but they last.  I picked up one at TJ Maxx about a year or so ago, and a second on Amazon a few months back.  There are multiple sizes available, but my favorite is the 25oz.  It’s big enough so that I don’t have to refill it incredibly often, but small enough that it isn’t quite as awkward to carry.

And I’m not kidding when I say they last.  I’ve dropped mine and banged them around quite often - it makes an incredible noise when you drop a metal bottle on concrete, just so you know - and although they’re a bit scuffed and dinged up, they still work just as well as the day I bought them.

The second change I’ve made is to use less disposable k-cups.  I’m fairly certain that I haven’t hidden my coffee addiction too well (or at all), but as it grew to a multiple-cups-per-day level, I started feeling a bit guilty over so many k-cups ending up in the trash.

So, with my boss’ gracious permission, I now have my very own personal coffee pot in my office! 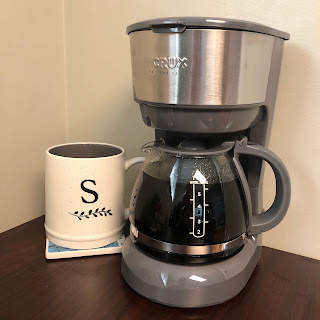 While technically it’s a 5-cup coffee pot...it’s usually around two cups for me. But, to be fair, my favorite mugs are ginormous.  Anyway, the coffee pot has been a wonderful addition, both in terms of caffeination and that I am using way, way, way less plastic now, which was my goal.

The final change I made in my bid to use less disposable plastic in my daily life was to purchase a more eco-friendly utensil set to keep at my desk.  I found an inexpensive one on Amazon, and it’s been worth every penny! 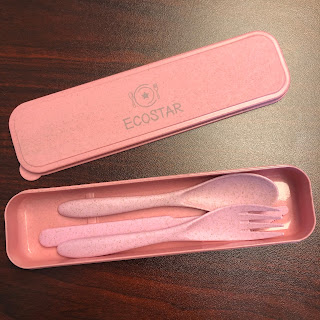 The fact that it’s pink just makes it so much better.

I use the spoon most often (in my coffee, of course), but I use the knife and fork occasionally for my lunches.  I’m able to wash them quickly in the break room at work, and then they’re ready for the next day.  No more waste!

Now, am I saying that they’re the best company ever and you should spend all your money there to support the cause? Nope.

All I am saying is this:  I’d rather support a company (even if it’s for-profit) that is giving back somehow.  4Ocean does that, and I like that.

Plus, the bracelets are really, really cute. Each month there is a special limited edition style featured, but there are some available year-round. When I first looked into the site, the limited edition bracelet for the month was called 'Stingray'...and I bought them almost immediately.

My Stingray bracelets, which I adore dearly.

Their site sells other products too, as I mentioned, and they’re beginning to use plastic they’ve pulled from the oceans to create new products - like phone cases, for example.

As I said at the beginning, I’m by no means an expert on the environmental movement.  However, I am one person who has made the decision to implement changes into my lifestyle in order to do what I can to help out.

Imagine what would happen if more people did the same.
Happy Earth Day, everyone!