An Honorary Reporter & Member of the K-Influencer Academy for 2021!

Shortly after my last post, I realized I may have gotten ahead of myself a little bit.  Oops.

So that’s what I’m doing now!

I found out about the Honorary Reporter program earlier in the year through a Facebook group for the K-Friends program I joined last year.  After doing some research into it, I applied for the program back in March, and found out I had been accepted in April.

Also around the same time, I applied to be part of the 2021 K-Influencer Academy, another program offered by Korea.net, and found out I had been accepted into that as well! 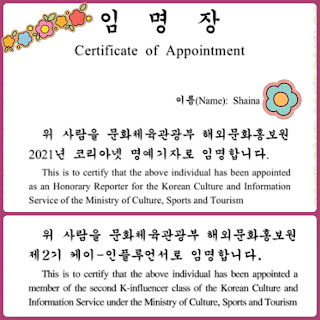 But what does all of this mean?

The Honorary Reporters, to quote this article from Korea.net: “consist of foreign nationals both in and out of Korea who promote Korean culture, information and events around the world for a year on Korea.net and its social media accounts”.

Essentially, I’ll be writing articles about my experiences with Korean culture, current events, or just general information as it pertains to Korea.  As you already know, I’ve written one article about learning the Korean language, and my second article was about cooking Korean side dishes, or 반찬.  I’m already planning for future articles, as well, so be on the lookout for those!

Now, about the K-Influencer Academy.  It’s similar to the Honorary Reporter program, but it’s designed for YouTube creators.  It is a training program for anyone who loves Korea, and has a YouTube channel. The program offers video editing workshops and tips on growing and marketing a YouTube channel.

I honestly did not expect to be accepted into the Academy, since I have a grand total of three subscribers on my Made By Smree YouTube Channel.  But somehow I was accepted into the general program, which means I’ll be participating in monthly mission video prompts from June through December.
I've recently completed my very first video, which you can watch below! (And hey, if you want to subscribe for future content from me, I would be absolutely okay with that too.)
So there you have it: How I became both an Honorary Reporter AND part of the K-Influencer Academy for 2021.
Now that we're all up to speed, I hope you all enjoy the content that is yet to come, as well as all the shenanigans that are sure to happen along the way!